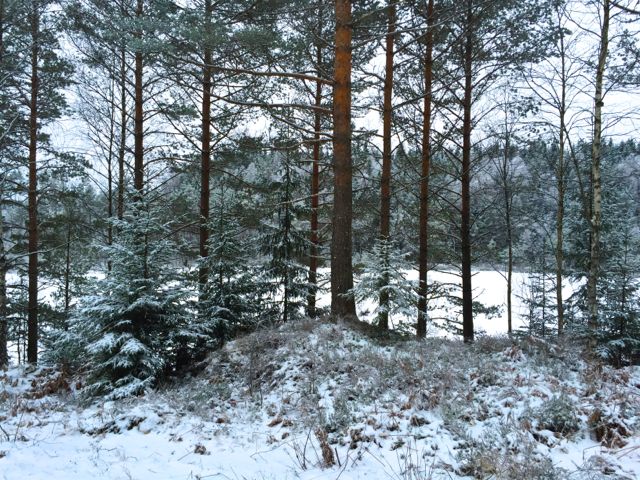 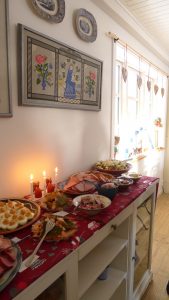 Just returned from a Swedish Christmas where Santa is Tomte, reindeers deposed by goats, and ham the centrepiece rather than turkey. Naturally every country has its own traditions – indeed what better than a thriving food culture to show the health of a Nation?

After family celebrations we headed north a little where it was a cool crisp white minus 10 degrees. The panoramic views from the locks at Trollhattan, my husband’s native heath, were breathtaking and paths deserted. The fishing village of Grebbestad was virtually icebound creating etched glass panes across the bay, locking fishing boats and yachts like necklaces of semi precious stones. We dined (thanks to an inspired Christmas present) on board Donalda, an old fashioned fishing boat, moored at Grebbestad. She is used for fishing and celebrations – indeed a few summers ago we were aboard cruising the fjord for a wedding ceremony! When not involved in such

activities Donalda becomes a restaurant seating around 20 deep in her hull. The prawns and langustine had come in on the adjacent small fishing boat and were served in hand crafted wooden fish boxes. The two main dishes on offer were traditional to the region and perfect along with local beers and cider. A more charming venue and fresher seafood would be hard to find. Our hosts were friendly and gifted, our meal superb and it was most certainly a night to remember. 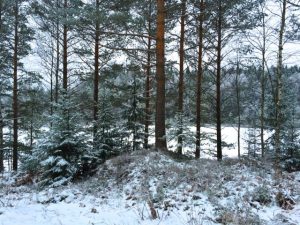 The following day the four of us went walking in the Dalsland wilderness close to the Norwegian border with wildlife and environment expert Bosse. We saw red squirrel and fox, capercaillie and tracks of all manner of mammals. We saw frozen lakes and frosted firs but best of all we heard a family of wolves, calling in the wilderness. A rare experience hardened film crews and professional naturalists can spend years seeking. Eerie, awesome and magical moments we shall never forget. We were torn between standing bewitched and legging it to the car but reason, along with confidence in our guide, prevailed and we continued calmly, safe in the knowledge they were on the opposite slope to ours! Later at Nordens Ark we tremendously enjoyed watching the fascinating antics of snow leopard youngsters and tree climbing wolverines. We could study wolves from a safe distance but nothing would match the call of the wild.

Back in Scotland we may not have ‘the big four’ (moose, wolverine, wolf and bear) ..and thank goodness for re-wilding is not my bag… but we have magnificent red deer, grouse, otters and a host of cloven and feathered species to treasure. Scotland is indeed a great Nation for nature lovers and food lovers so a Happy New Year to you all and make 2018 a healthy one with local seasonal produce!

Spellbound by our Visit to this Fabulous Chocolate Factory